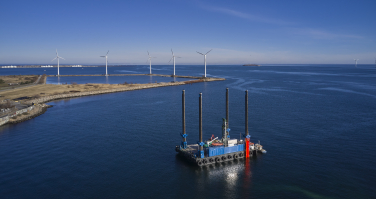 When the coronavirus pandemic struck the world, it entailed unknown barriers and obstacles in our everyday lives. However, Denmark and the Danish building and construction industry seem to have done well in general in the past year. Fortunately, the main part of the Danish construction sites has been able to carry on as normal, naturally with new measures to help prevent spreading the coronavirus, and we have not experienced a slow-down in the business. Maybe even on the contrary.

The activities in the building and construction industry have an impact on the markets of soil engineering and foundation, and here we have seen a high level of activity for several years now, e.g. due to a number of large and rather complex building and construction projects. For example, several large harbour extension projects have been completed – and new harbour projects are ongoing or in the pipeline. The work on the future tunnel between Germany and Denmark – the Fehmarnbelt Link – has just been kicked off, and in Copenhagen we are working on a new metro line. Also in the near future, we expect to establish a number of cloudburst tunnels, a 1.4-kilometre road tunnel – the Nordhavn Tunnel – in the northern part of Copenhagen, as well as a new island connected to Copenhagen – Lynetteholmen – which will comprise 20,000 homes for 35,000 residents. The island will also be part of a barrier against the rising sea level.

There is also a high level of activity within the residential building area. Figures from the Danish Construction Association shows that 2020 set a new Danish record for the number of new-built homes. In 2020, about 36,000 new homes (of this about 5,500 one-family houses) were being built, which corresponds to the number of homes in 2013 multiplied by three.

Many of the new homes are located in the major cities in the form of multi-storey buildings or even tower buildings, which has not been commonly used in Denmark before. In many places, the buildings are established in areas being transformed from previous harbour and/or industrial areas to new urban areas – or by general urban agglomeration. Especially in the harbour areas, the soil conditions are usually poor, as the areas were originally reclaimed by more or less uncontrolled backfilling on marine sediments with layers of soft soil, which necessitates pile foundation.

The combination of an increased number of high-rise buildings in new urban areas and a demand for parking in deep, perhaps even multi-storey basements pose interesting foundation challenges. These include settlement challenges and, in some places, even uplift challenges, as the underground of the harbours, especially on the Jutland east coast, is characterized by plastic tertiary clay with properties similarly to, but often worse than the typical “London clay”.

The major construction projects and the urban development with high-rise buildings entail a need for geotechnical expertise in the planning, design and execution phases. In relation to foundation, there is a tendency towards foundation on longer piles – driven as well as drilled – more extensive groundwater lowering and deeper construction pits with retaining walls. This results in an increased need for geotechnical investigation and documentation with CPT, core drilling and advanced laboratory tests (e.g. oedometer test and triaxial test).

Altogether, there are good conditions for work in the geotechnical business as well as in the ground engineering business – even though there is still keen competition.