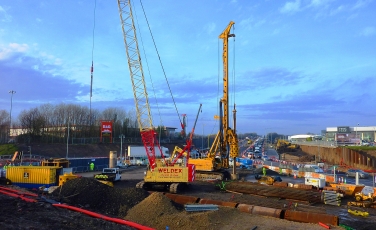 Sisk Lagan JV, the Main Contractor grouping responsible for the A19/A1058 Junction Improvement project in Newcastle has recently awarded the piling scope of works for critical structures on the Highways England project to Bauer Technologies.

Work is now underway to create an improved A19/A1058 Coast Road junction which will support opportunities and economic growth in the North East. The £75m scheme involves the upgrade of the existing roundabout to an ambitious three-level interchange.

Bauer’s scope of works is to install 583 contiguous rotary bored piles with diameters ranging from 600mm to 1500mm. The piles, which are up to 31m long, are founded in sandstone bedrock to form contiguous pile walls, creating the trough for the future A19 ‘dive under’. A number of the retaining wall piles also act as hybrid design elements by carrying the load of three major single span bridges across the underpass. In order to verify the capacity of these critical foundations, Bauer will carry out three permanent pile load tests using the innovative Osterberg method.

The project is particularly challenging, as it involves Bauer working within a live, major roundabout with a heavy volume of traffic. In order to manage the associated risks efficiently, Bauer is working closely with SLJV and Highways England in order to implement stringent health and safety processes. In addition Bauer is enthusiastically participating in Highways England’s “Raising the Bar” scheme which is designed to raise standards in Efficiency, Quality and Health and Safety.

Piling works started in December 2016, with mobilisation of a Bauer BG30 rig, which will be followed by a second machine in early 2017. Piling works will be carried out in two phases and are expected to be complete by the end of 2017.