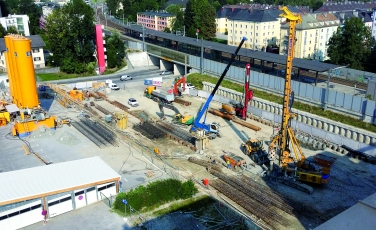 In 2015, BAUER Spezialtiefbau Ges.m.b.H. was contracted by The Gemeinnützige Salzburger Landeskliniken Betriebsgesellschaft mbH (non-profit organisation managing the Salzburg state hospitals) to construct the foundation works for a new eight story laboratory building on the area of the Landeskrankenhaus Salzburg (state hospital).

From August to November 2015 Bauer installed approximately 4,500 metres of slurry stabilized bored piles into very demanding subsoil and in close proximity to the nearby railway track. The piles have a diameter of 1,180 millimetres.

The construction soil is made up of several layers, including a soil layer close to the surface which consists of sandy fine to medium-sized gravel. Below this layer, Salzburg marine clay, a sand-slit-clay mixture which easily deforms, is located up to a depth of 40 metres. Under this layer there is ground moraine, stiff and semi-solid silts and cray with sufficient bearing capacity. Due to the plastic silt and clay, shallow foundation would result in unwanted deformations and settlements. In addition, the nearby ÖBB buildings could be impaired. For these reasons, a foundation with deep piles of up to 48 metres was selected in order to transfer the structural loads into the bearing soil layers. Piles embedded into the moraine should be at least 5 metres here.

In addition to the construction of slurry stabilized bored piles using a BAUER BG 36 drilling rig, a total of around 11,000 tons of soil excavation mixed with bentonite was disposed. Energy pile technology was utilised to generate cold and heat from groundwater, thus achieving up to 450 kilowatt peak refrigerating capacity. For this purpose, the reinforcement cages were equipped with absorber lines made of polyethylene.

A partially cased bore was executed up to a depth of eight metres; for the subsequent uncased drilling, bentonite slurry was filled in to stabilize the borehole wall. The bentonite level was kept at least one meter above the ground water level, thus eliminating hydraulic ground failure. Approximately 9,000 meter pipelines were combined and installed up to the connecting shafts after having completed the special foundation works.

Despite difficult geological and geometric side conditions, along with confined space and tight construction schedule, BAUER Spezialtiefbau Ges.m.b.H. were able to complete the works in time and to the client’s utmost satisfaction.